Photo: Sander Gusinow An apparel booth in front of the closed-down Apple store.

Some commentators have described the look of downtown Portland as a “warzone,” citing the graffiti, debris, and broken windows resulting from clashes between Black Lives Matter demonstrators and state and federal law enforcement.

But the description ignores the vibrancy of downtown Portland, where a new artistic style has emerged as a result of the Black Lives Matter protests. 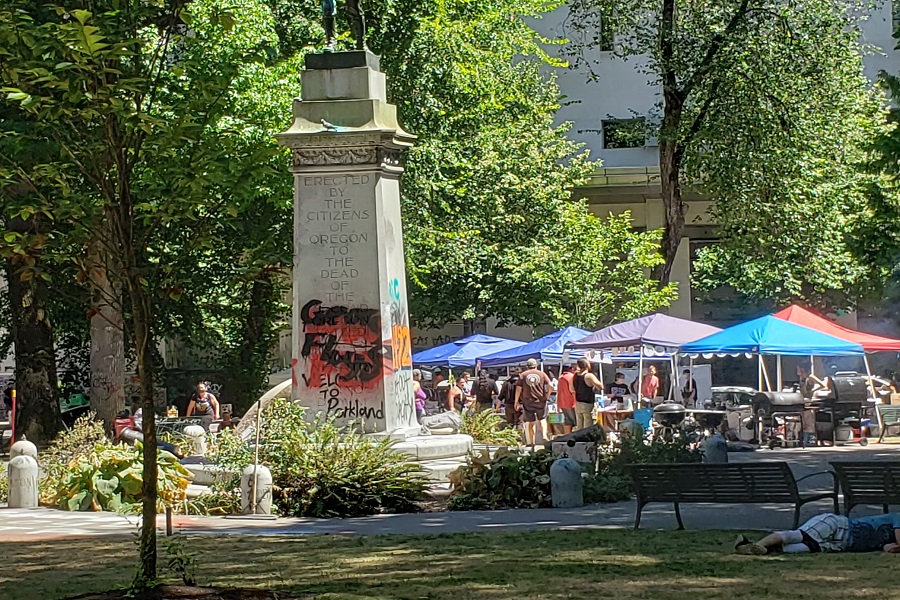 While graffiti, broken glass and boarded-up windows are commonplace, equally as noticeable are the vivid murals, smoking barbeques, and green and blue tents where food, water, t-shirts and other art are sold or given away.

“I was an artist full time, but right now my attention is on the protests,” says Itchytrigga TV, a local musician who has coordinated with artists seeking to sell their work during the demonstrations.

When organizing the booths, he modeled his approach after the Portland Saturday Market, an outdoor arts and crafts market. 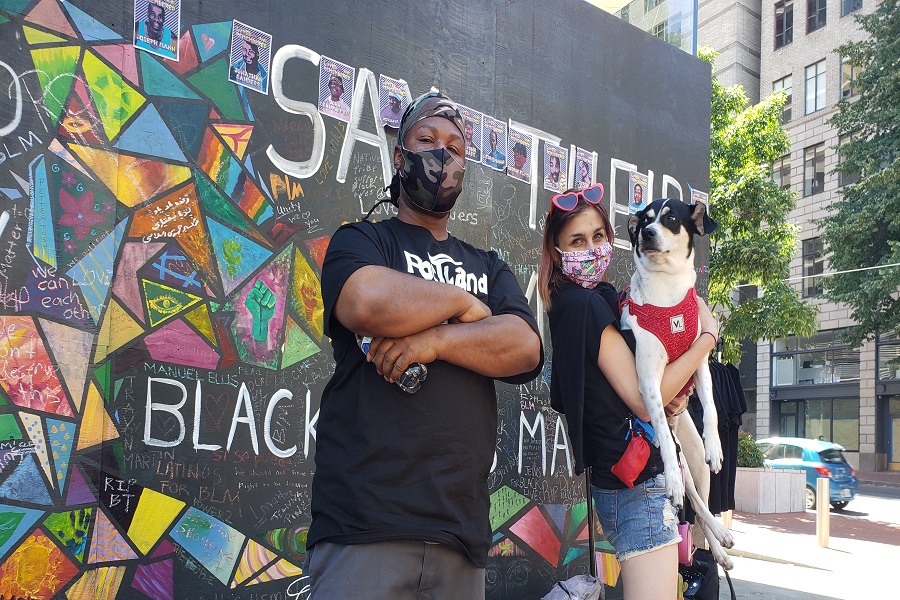 While there were three other vendors selling shirts, face masks and bandoliers in a two-block radius, Itchytrigga says he does not use his position as an organizer to sell his own work.

He is committed to demonstrating full time, and says selling his own product while being a voice of the movement could be seen as a conflict of interest.

After we finished talking, he returned to his bullhorn, issuing calls to action as people in face masks passed by. 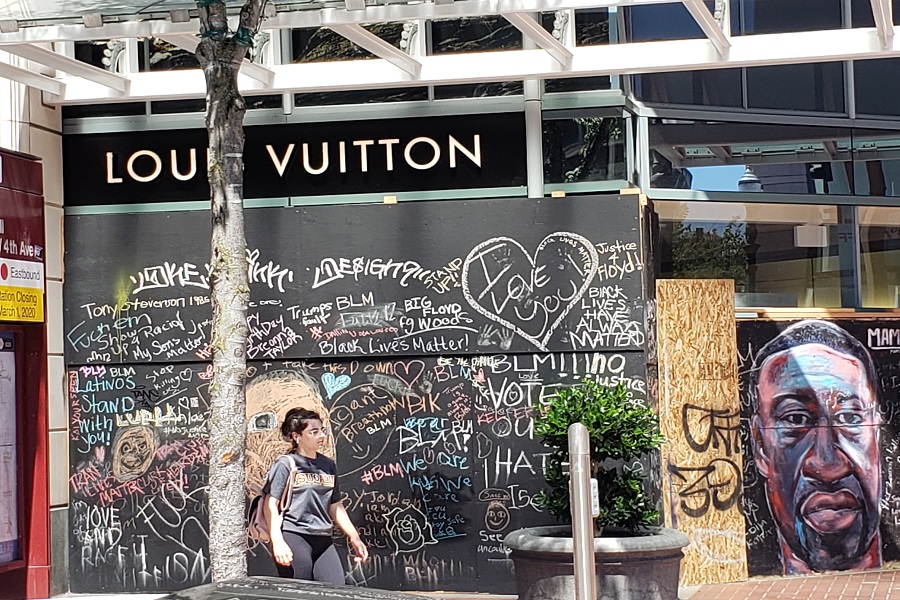 Rufus, who sells Black Lives Matter apparel a block down from Itchytrigga, says he has not experienced any theft of his products, although he has bought insurance just in case.

“I’ve been doing this for 30 years. I remember the Rodney King riots,” he says. “I made shirts when Obama got elected, I made products for Trayvon Martin and Aretha Franklin. Things really slowed down during Covid, but now they’ve picked up.”

Many businesses in downtown Portland have elected to close early or stopped operation altogether on account of the protests. Countless storefronts have printer paper taped to their windows, updating their hours to close before sundown. 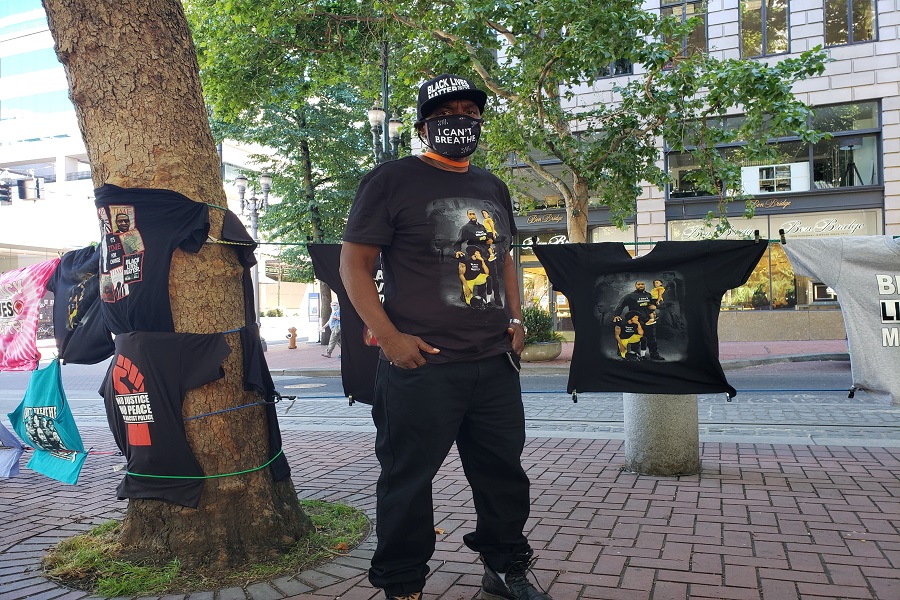 Other businesses do not have the luxury.

“Some businesses get to close early, but we are 24-hours so what can we do?” says a SmartPark employee, who chose to remain anonymous. “Every night there is chaos. Every morning something doesn’t work or something is broken.”

As we spoke, repairmen mended a metal garage gate that looked like it had been forced open. 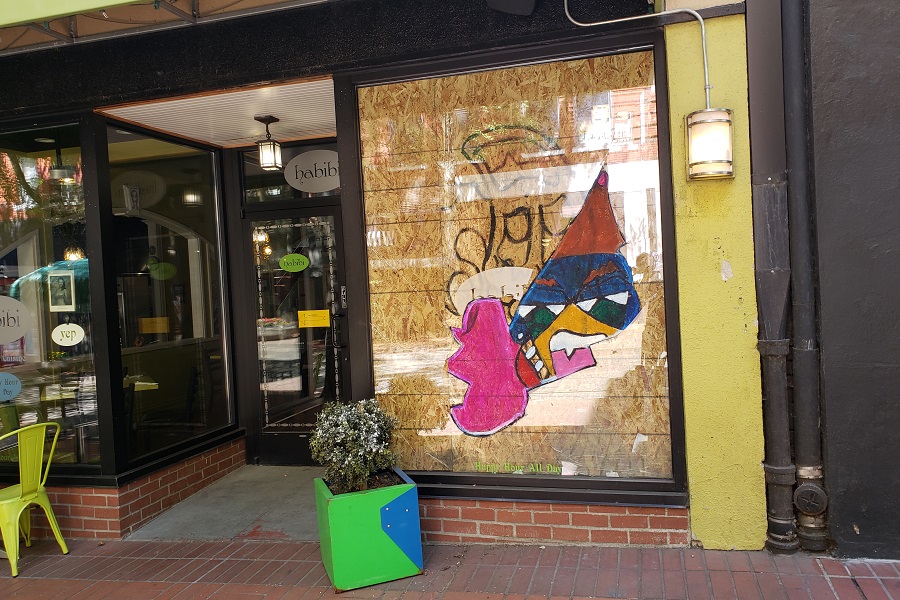 A muralist painted an angry penguin in the outline of where a storefront window was shattered. Photo: Sander Gusinow

For some businesses, the demonstrations have helped to increase foot traffic, and provided a lifeline amid faltering sales due to the COVID-19 pandemic.

COVID-19 took a bite out of the cupcakery’s business, but as customers became more comfortable ordering online, and foot traffic increased amid the protests, sales have become closer to normal.

The employee noted foot traffic is not even close to where it was before the pandemic. 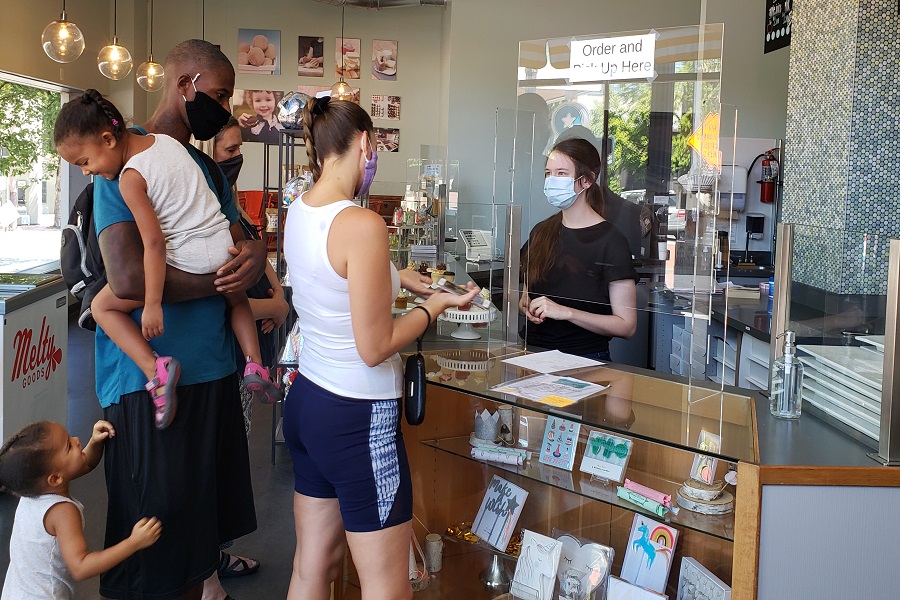 “Things really slowed down in February,” says Ben, who works at The Block, a food cart located in Pioneer Square. “Then on the Saturday, when the protests started, things really picked up. Now things are slowing down again.”

For other businesses, the demonstrations have led to stolen goods and damaged property.

Cheyenne, who manages Chalice Farms, a cannabis dispensary, says there have been multiple instances of looting and vandalism at her store since the demonstrations began in June.

“This last time we were looted, all they managed to make off with were some accessories.” She adds that sales have decreased since the demonstrations began. Still, Cheyenne expressed optimism.

“We know it’s mostly good people out there, but there are certainly some rotten apples willing to take advantage of the situation.” 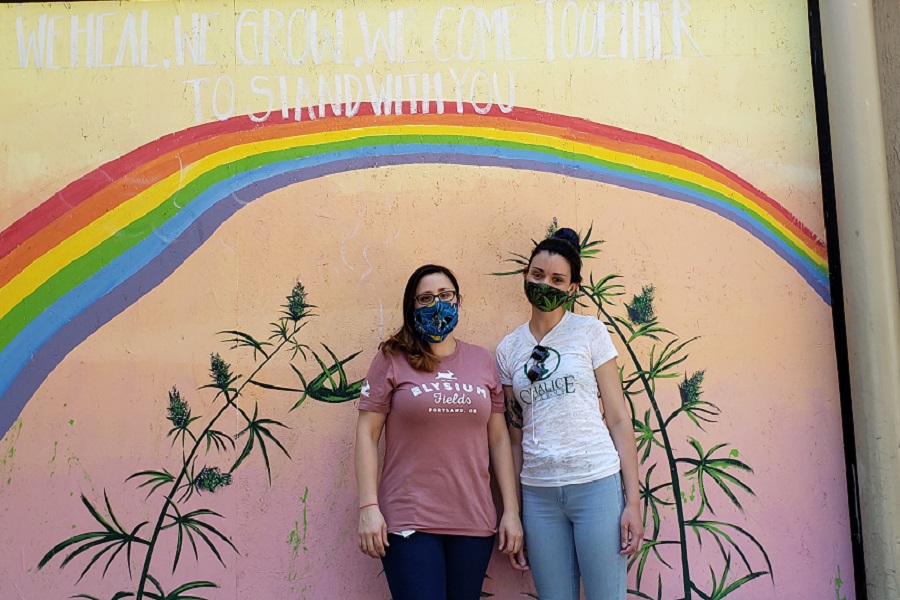 The demonstrations have inspired businesses to paint murals in support of the Black Lives Matter protesters.

Chalice Farms employee Megan was in the middle of painting a mural on the storefront - a vibrant rainbow on a backdrop of violet faded to pink - as we spoke.

“Our goal is to make the storefront more beautiful than it was before,” says Cheyenne.